This piece is part of a series connected to GenPol’s work on parental leave in the UK and beyond.

On 1 October 2018, the UK government revealed plans to consult on the possibility of publishing “parental leave and pay” policies for businesses with over 250 employees. Business secretary Greg Clark made the announcement as part of a series of new measures designed to support parents, and notably new mothers, in the workplace. Clark’s comments come in the wake of a concerning report from the Labour Market Outlook: Focus on Working Parents in 2017, which found that just 5 per cent of new fathers and 8 per cent of new mothers have opted to take up their legal right to the SPL (Shared Parental Leave) scheme, first introduced in April 2015.

The concerning figures do not stop there. In March 2017, the UK was ranked the third worst country in Europe for paid parental leave. Under current legislation, Statutory Maternity Leave is 52 weeks, whereas fathers claiming Paternity Leave can choose to take either 1 or 2 consecutive weeks. The current wording of the legislation dictates that ‘paternity leave cannot start before the birth of the child, and must finish ‘within 56 days of the birth’. In the case of a premature baby, this leave can be extended to 56 days after the due date.

This somewhat dispassionate reference to premature birth is indicative of a wider gap in existing parental-leave policy. Current Parental Leave Legislation fails to set out any tangible guidelines to support parents confronted with a premature birth, and makes no allowances for the financial, emotional, and logistical impact this will have on their working life (or, indeed, on their return to the workplace). According to statistics published by the Premature Baby Charity Bliss,  up to 95,000 babies are cared for in neonatal units in the UK because they have been born prematurely (before 37 weeks of pregnancy). Parents often have to travel to hospitals on a daily basis and wait many weeks before their babies can actually return home.

In my case, it was three and a half months. I was born at 25 weeks, weighing 1lb 5oz (602g), and received treatment in a neonatal care unit from November 1990 to March 1991. Despite this, my family was, undoubtedly, very fortunate. My parents lived within easy commuting distance of an excellent NICU (Neonatal Intensive Care Unit) and as secondary school teachers received a much more generous leave, and pay allowances, than the statutory minimum. My father’s school gave him 6 weeks leave on full pay without him having to ask (a particularly generous gesture given there was no statutory paternity leave available in 1990). My mother’s situation was sadly more complex. She was entitled to 3 months’ full pay, then up to another 9 months at steadily reduced pay. Complications arose when doctors thought it might be possible to stop her labour. If this had been the case, my mother would have had full sick pay up to my birth, and then 3 months on full pay afterwards. In the end I left the unit on the day my Mum’s full-pay leave ran out. She found herself at home with a new-born baby (her first), with a variety of health complications, and zero remaining full-pay leave to help ease this transition, from life in the unit to life at home. 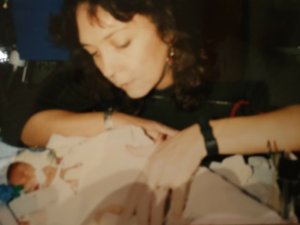 (Ellen and her mum Maureen in the unit, December 1990. Photo Credits: Angus Walker)

Her situation, it seems, is still extremely common 28 years later. A lack of adequate parental leave (and pay) continues to be a prevalent source of stress among parents of premature children. More than half of new- mothers report anxiety and symptoms of Post-Traumatic Stress Disorder following neonatal intensive care, and 40% of mothers develop postnatal depression following neonatal intensive care. Extra paid leave is a small gesture in the face of so much emotional strain, but is nonetheless an indispensable step in helping preemie parents, and especially mothers, feel supported in their return home and to work.

In October 2017, Sadiq Khan announced plans to grant extra leave for parents of premature babies, just months after a proposed Maternity and Paternity Leave (Premature Birth) Bill was scrapped in parliament. Under these new reforms, City Hall employees with a child born before 37 weeks will be entitled to a day’s premature baby leave and pay for every day between the date their baby was born and the due date. Both parents will also be granted additional neonatal leave, and pay, for every day their baby spends in neonatal care.

Whilst recent studies indicate that rates of survival rates for extreme preterm births are up from 40% to 53%, the odds still remain stacked against thousands of tiny babies across the UK. I do not think additional paid leave would have made these stakes seem any less terrifying for my parents, but I have no doubt that it would eased some of the financial and logistical pressures they had to contend with. My mother always used to say that having a premature baby was like being faced with an immense cliff face that all of us had to climb. Whilst no legislation or policy provision can ever efface the torturous traces of that ascent, it can go some way to making sure that cliff is less crippling for those who find themselves on it: an extra ounce of energy to help families keep the summit in sight.